Note: This page deals with advanced brewing topics. If you're looking for an introduction to all grain brewing, we recommend starting at GF Brewing 201 - Moving to All Grain Brewing

There's a common saying that "brewers make wort and yeast makes beer". Brewers make wort from grain by mashing, a process that involves combining grain with hot water to gelatinize starches, convert starches to sugar, and extract those sugars from the grain, creating a sugary liquid called wort. Different temperatures help to modify the grain components, generally by breaking down the cellular structure of the grain, making starches soluble, unraveling and making the starch within those cells more available, and triggering molecular changes through enzymes that become active at specific temperature ranges. Those enzymes may be endogenous (native to the grain), exogenous (added by the brewer), or a combination of the two. Understanding how different mash temperatures and enzymes work is important for influencing not just the amount of sugar extracted from the grain, but the types of carbohydrates (glucose, maltose, maltotriose, dextrins, etc) that will be present, the fermentability of the wort, body and viscosity, head formation and retention, and other key variables that will effect the final outcome of a beer.

In general terms, different mash temperatures and steps are aimed at achieving the following:

Gluten free brewers take note: the temperatures and pH ranges that are commonly cited for conventional barley brewing may differ for gluten free grains and the exogenous enzymes GF brewers are accustomed to working with. Alpha amylase enzymes naturally present in millet and rice, for example, likely have different temperature and pH ranges, optimums and denaturing points than those found in barley.[1] Unless specified otherwise, the temperature and pH ranges identified below come from conventional, barley-based brewing literature.

Beta glucans are naturally occuring polymers in the cell walls of cereals, including both gluten and non gluten containing types.[2] Beta glucans have some positive health benefits and can contribute positively to the body and mouthfeel of beer. Especially in grains that are high in beta glucans (e.g. oats and buckwheat), this can also create problems during mashing, making it difficult to separate wort from grain (slow lautering and/or "stuck mash"). A beta glucan rest, typically in the 95-131°F (35-55°C) range -- optimally 113°F/35°C and pH 4.5-5.5 -- encourages beta glucanase enzymes that can break down these gummy structures and improve mash filtration.

Enzymes active in this rest are helpful for breaking down proteins that release Free Amino Nitrogen (FAN), necessary for yeast health during fermentation, reducing protein haze, and aiding in protein formation that contributes to foam (head) formation and retention in carbonated beer. The conventionally cited optimization range is 113 - 138°F (45 - 59°C), with FAN-producing peptidase operating at the lower end. Proteinase (operating at the higher end of that range), helps to break large protein chains (which can cause protein haze and storage stabilization issues) into medium chains useful for body and foam retention.[3]

A ferulic acid rest (110-113°F / 43 - 45°C) helps to extract flavor compound precursors that can naturally produce clove-like flavor in the finished beer -- where appropriate to style (e.g. German wheat beer and certain Belgian styles). Ferulic acid (extracted from the grain) is a precursor for 4-vinylguaiacol (4VG) formation that can be used in combination with a phenolic off flavor producing (POF+) yeast. 4VG (associated with clove flavor) is usually below perceptible taste threshold without a POF+ yeast. Ferulic acid is derived from arabinoxylan, a cellulose material found in the cell walls of cereal grains (including millet and buckwheat). There does not appear to be any research into the ferulic acid potential of gluten-free grains, however one researcher suggests that including a ferulic acid rest at these lower temperatures would have the intended effect, similar to wheat or barley -- provided a POF+ yeast is used in fermentation.[4].

Debranching enzymes play an important role in breaking down more complex amylopectin starches, that consist of α-1, 6-glycosidic linkages -- akin to the branch points of trees. By breaking apart these branch points, these starch chains can then be further broken down into smaller dextrin chains and mono-, di-, and tri-saccharides (glucose, maltose, maltotriose) by amylolytic enzymes capable of breaking apart the more linear 1-4 glycosidic links. In more simple terms, a mash where less debranching occurs will have relatively more unfermentable dextrins composed of these branched starch molecules. In conventional brewing at least, endogenous limit dextrinase enzymes (e.g. pullulanase) are active in the optimal range of 131-140°F (55-60°C) and denatured at 145°F (63°C).[5] Ondea Pro is an exogenous enzyme "cocktail" that includes a pullulanase capable of this debranching function.

Saccharification is of course what most people think of as the main event in mashing. This is where starch chains are reduced into smaller fermentable sugars (glucose, maltose, and maltotriose). While this is a key outcome and directly impacts the fermentability of wort, it does not happen in isolation of the other mash steps (they are interdependent).

All-grain barley brewers who don't want to immerse themselves in the science of mashing and the various enzymes at work have the luxury of thinking in fairly simplistic terms: higher mash temps tend to produce beers with more body, while lower mash temps produce drier, more fermentable beers. Things aren't quite that straightforward in gluten free wort production, where GF brewers need to consider multiple factors that influence the carbohydrate composition of their wort.

In conventional (barley-based) brewing, the gelatinization step -- whereby starch crystals are made soluble and break open -- coincides with saccharification by beta and alpha amylase enzymes. For barley, wheat and rye, the optimum temperatures of these activities are within the same relative band (130-155°F / 54-68°C).[6] Gluten free grains typically have a higher gelatinization temperature band, meaning those starches are less accessible to the amylase enzymes unless they have first been solubilized at temperatures that would denature endogenous enzymes. This is one of the major drivers for using exogenous alpha amylase enzymes -- either to replace endogenous enzymes that have been denatured by high temperatures, and/or that are stable at these higher gelatinization temperatures.

The mash routine alternatives below include a reverse or falling mash method where gelatinization takes place at the outset. Performing a gelatinization step later in the mash routine -- together with heat stable alpha amylase enzymes -- has also been shown to be an effective way of maximizing extract potential of gluten free grains.

Methods of heating, cooling and maintaining wort temperature during mash

Mash thickness refers to the amount of water to grain (aka liquor to grist) ratio during the mash. A good starting point for gluten free grain mashing, where exogenous enzymes need sufficient moisture for distribution, is 1.5 quarts of mash water per pound of grain (approximately 3 liters per kilogram).

A thinner mash may dilute the effectiveness of exogenous enzymes (requiring a higher dosage to obtain similar results).

Enzyme activities (whether from exogenous or endogenous sources) operate within optimal temperature and pH ranges. This is true in conventional (barley) brewing, and is no less true for all grain gluten free beer. After mashing in (with water and grain combined), it is good practice to take an initial pH reading, adjust with acids if needed, and take subsequent pH readings during and at the end of the mash.

All-grain brewers often target pH in the range of 5.1-5.4 during the mashing process, but there may be other targets to consider depending on the type of beer and the enzymes being employed. There is some conflicting product information regarding optimum pH for some commercial enzymes, especially those that combine multiple enzyme components (e.g. Ondea Pro and Ceremix Flex). GFHB suggests a starting mash pH range of 4.6 - 4.8 when using Ondea Pro and Ceremix Flex[7], perhaps because this lower pH level is optimal for pullulanase. That lower range has been debated in Zero Tolerance discussions.[8]

For sour beers, it's recommended to pre-acidify wort to 4.2 - 4.8 before adding lactic acid producing bacteria to inhibit unwanted bacteria and to reduce foam degradation.[9]

While conventional barley brewers have the option to lower pH by adding acidulated malt as well as by using lactic acid, gluten free brewers are currently limited to the latter.

Selecting a mash profile for your brew session will depend on a few different factors:

The most straightforward option for mashing is the infusion mash which involves adding grains at a target temperature, and holding at that temperature for the duration of the mash. In both home and professional brewery settings, this choice may be dictated by equipment and the inability to easily adjust that temperature. Depending on the type of equipment involved (and how well it retains heat), there may be a tendency to lose a few degrees of heat from start to finish. With the right enzymes and temperature target, this can be a completely acceptable way to achieve the main objective of converting starches to sugars.

Below three alternative versions of a single temperature infusion mash are outlined. 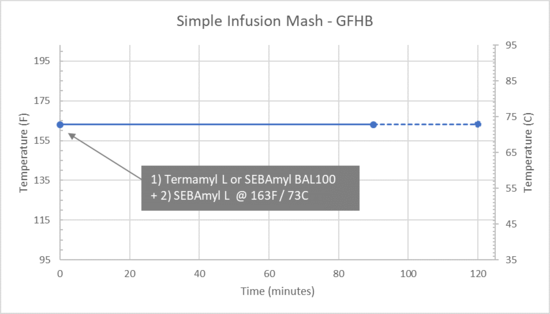 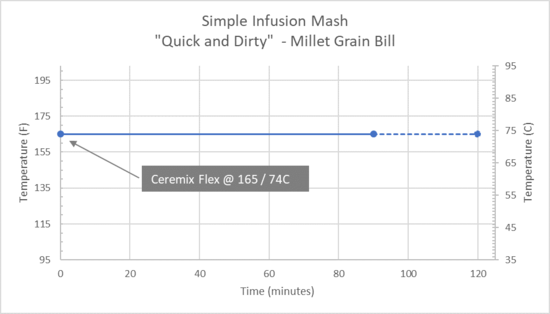 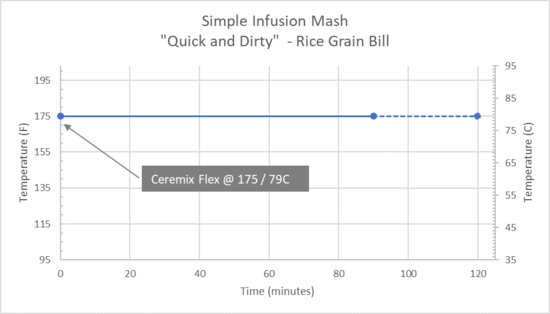 After the infusion mash method, the next most conventional approach is a rising step mash. This takes the grain through progressive steps that help to degrade cellular structures and activate endogenous enzymes that operate at different temperature bands. This can be useful with exogenous enzymes as well since some may have a lower optimum and/or denaturing point than a higher temperature infusion mash might allow for.

Aaron Gervais (Otherwise Brewing) has suggested two different rising step profiles with Ondea Pro and Ceremix Flex enzymes that vary depending on the desired attenuation potential of the beer. The medium bodied approach will constrain some of the dextrin to fermentable sugar conversion, where the light bodied approach will maximize dextrin conversion. 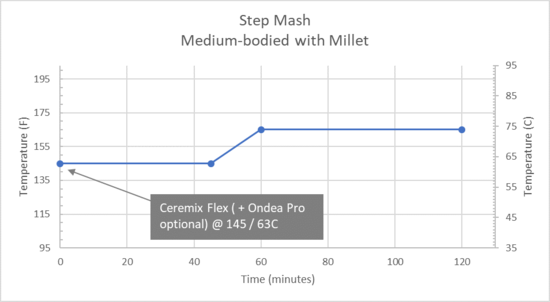 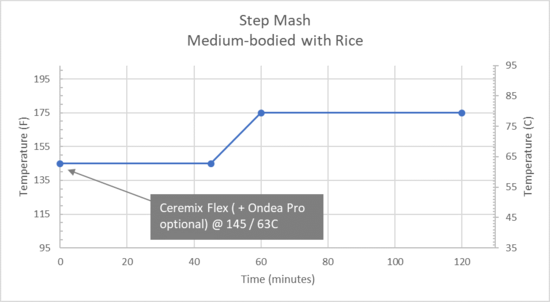 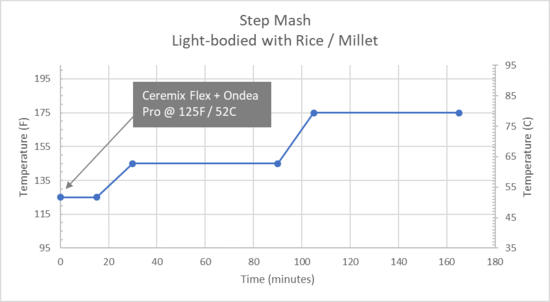 Additional mash steps can be incorporated into a rising step profile depending on the types of ingredients and objectives. A ferulic acid rest, for instance, may be beneficial for creating the 4VG precursor that gives "wheat beer" styles (e.g. hefeweizen) its distinctive clove flavor (this requires use of a POF+ yeast strain, often associated with German wheat and Belgian style beers). When using significant amounts of buckwheat malt, a beta glucan rest may help improve lauterability -- making it easier to drain wort from the grain at the end of the mash. 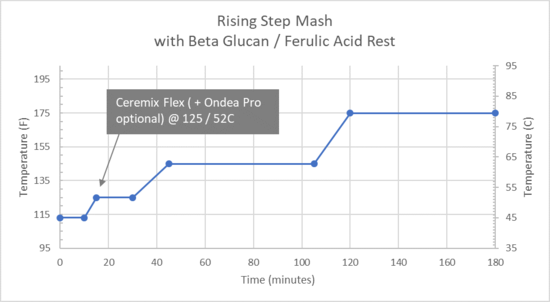 Proposed by gluten-free brewing pioneer Andrew Lavery, this method aims to leverage the endogenous enzymes in gluten free grains. This involves decanting some of the wort prior to denaturing endogenous enzymes at higher mash temperatures.[13] 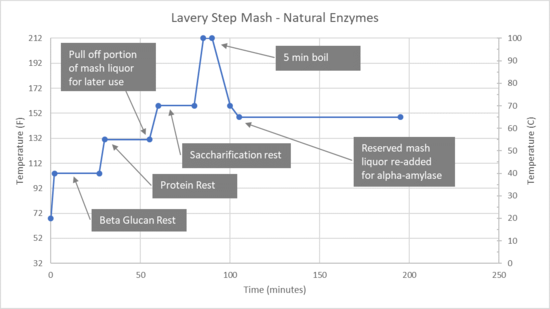 Similar to Lavery's method, Martin Zarnkow [14] has proposed a step mash method for 100% millet beers that does not require the use of exogenous enzymes.[15] A portion of the mash (40%) goes through a decoction at 68C/154F for 10 minutes before being added to the remainder. The mash is then taken through multiple rests with pH adjustments at two points. 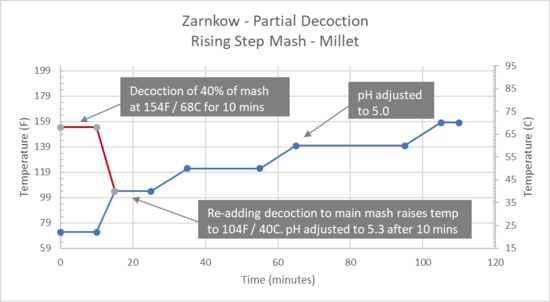 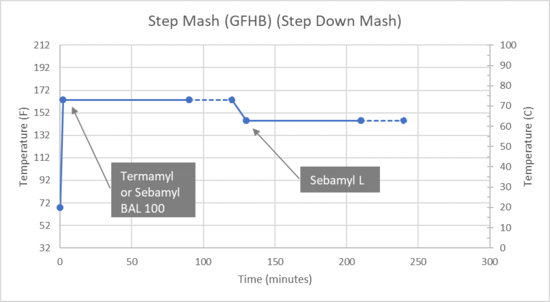 Retrieved from "https://zerotolerance.mywikis.wiki/w/index.php?title=Mashing&oldid=959"
Cookies help us deliver our services. By using our services, you agree to our use of cookies.